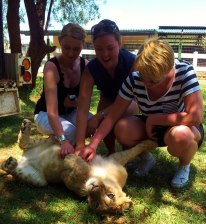 While some of these photos might look like we either photoshopped in a few wildlife photos or that in fact these animals are large, plastic figurines, the truth of the matter is we were in the bush baby!

Ok, so  I think the actual term is a game reserve, but you get my drift.  Probably one of the most amazingly surreal experiences I’ve ever had, getting up close to real live elephants, zebra and even the baby lion had such an impact on me and my two travelling friends.  It’s almost like seeing the Eiffel Tower on T.V. a million times, and then one day you’re there and it’s in person, and and you have a moment that you take a breath and it seems like you’ve never actually seen it before in your life.

That’s what this was like.  Seeing an elephant on T.V. a million times is one thing, feeling the softness behind their ears, standing back knowing if it took a step in your direction too quickly that you’d be squashed, feeding it a branch of leaves and seeing it eat the thing whole. It’s like you’ve never actually seen an elephant until that moment.  Same with the zebra – almost like when you look at a word for such a long time it doesn’t seem like a word anymore and it takes on a whole different shape.

I’ve said it before, and I’ll say it again, travel has such a way of opening your mind without you even realising it’s happening.  Being that close to nature, feeling like you’re really in the middle of it, is something no zoo will ever give you.  You feel just a bit more connected.

This site uses Akismet to reduce spam. Learn how your comment data is processed.